Latest News
You are here: Home1 / Latest News2 / News & Media3 / WILL YOU HAVE ENOUGH TO RETIRE ON?

Research shows Australians’ savings rates are among the worst in the world.

The global survey of 16,000 showed Australians expect their retirement to last an average of 23 years, but their savings and investments are on track to run dry within 10 years, making it the largest gap in Asia and the fourth largest globally.

The research also revealed more than half of the nation has never saved specifically for retirement outside of compulsory superannuation.

Globally, an average of 39 per cent of people have not saved or are planning to save for retirement, compared to 53 per cent in Australia.

With wage growth in Australia now slowing to 2.6 per cent per annum, the lowest rate of growth since 1998, many Australians were struggling to afford retirement.

One in six people believe they will never be in a financial position to fully retire.

The research found more than a third of retirees felt their preparation was insufficient and half feel they should have started saving at age 30. AM I BETTER OFF BUYING INSURANCE THROUGH MY SUPER? 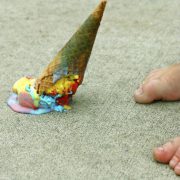 THE THREAT OF GLOBAL DEFLATION
Scroll to top